In June 2019, Chopard launched a new collection to a selected group of people in Gstaadt Switzerland. It was a rebirth of an Icon from their previous St Mortiz very successful collection.

Fast forward to November 2019, the Alpine Eagle was officially launched to the world and celebrated in Dubai during Dubai Watch Week.

As with every watch release there are always discussions and reviews evaluating the impact of the timepiece on today’s market – specially that we are in the era of sport steel watches taking over the entire industry. Every brand now is playing catch up with the giant who dominated this industry from Patek Philippe, Audemars Piguet and Rolex.

While vision is essential to running a family Maison, it is perseverance and determination that lead to success. Such was the path taken by Karl-Friedrich Scheufele in 1980, when he presented his very first watchmaking project. As a youthful 22-year-old employee in the family Manufacture at the time, he submitted an idea to his father for a watch to be named St. Moritz. A project with a resolutely coming of age dimension, within which a young man asserts himself, spreads his wings and takes flight.

The first sports watch from the Maison as well as the first timepiece made of steel in its workshops, the St. Moritz was profoundly innovative for Chopard, then a specialist in gold and diamond-set gold watches. It represented a real and carefully calculated risk. Karl-Friedrich Scheufele made it a success that was to become one of the Maison’s best-sellers for the next decade. Since then, he has become co-president of Chopard and taken on many other challenges. He was one of the first to sense the strength of the bonds between passionate enthusiasts of the automobile world and of watchmaking mechanics. It was he who set Chopard on the path of its now legendary partnership with the Mille Miglia race. In 1996, he decided to restore Haute Horlogerie to the place it deserved by founding Chopard Manufacture in Fleurier. In the same pioneering mode, it was on the same site in Fleurier that Chopard’s co-president had premises built, complete with the Minergie label certification criteria, thereby paving the way for sustainable luxury.

With Alpine Eagle, history is repeating itself, since it was at the insistence of his son Karl-Fritz, secretly supported by his grandfather Karl, that Karl-Friedrich Scheufele looked into the updating of the St. Moritz. At first reluctant, he was won over by his son’s strength of conviction, just as he himself had been able to win his father’s support 40 years ago.

It’s a chic timepiece collection reinterpretation of the St. Moritz, the first watch created in 1980 by Karl-Friedrich Scheufele, now co-president of Chopard.

The Alpine Eagle draws inspiration from the Alps and by the lofty power of the eagle that reigns supreme there. Today we have 2 steel models that we are looking at; both crafted from an exclusive, ultra-resistant and light-reflecting metal named Lucent Steel A223. 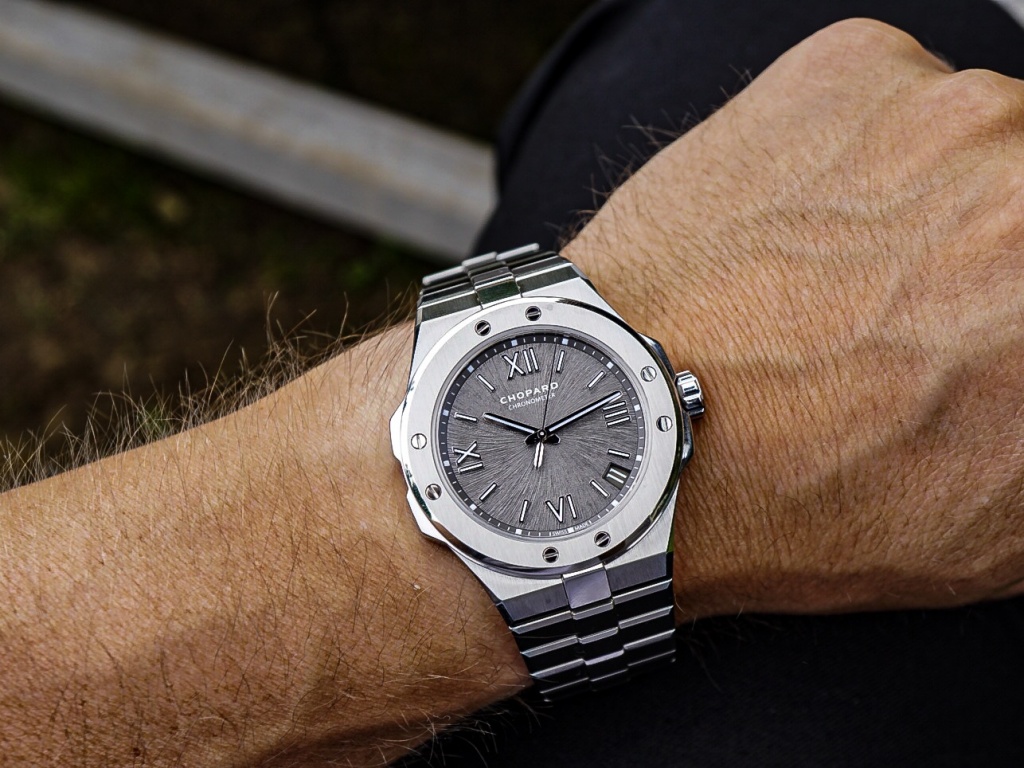 The case for all the models is 41mm in size and 9,70mm in thickness keeping the same design the St Moritz had previously including the 8 screws surrounding the bezel; 2 on each of the four sides. Alpine Eagle’s round bezel is punctuated by eight screws, grouped in pairs at the four cardinal points.

Their slots are set at a tangent to the circle of the bezel, a sign of high-quality finishing and sophisticated aesthetic purpose. These screws also serve a technical function by guaranteeing the water resistance of the watch to 100 metres. All Alpine Eagle’s flat surfaces are satin-brushed, a finish carefully crafted to create light effects further enhanced by polished chamfers 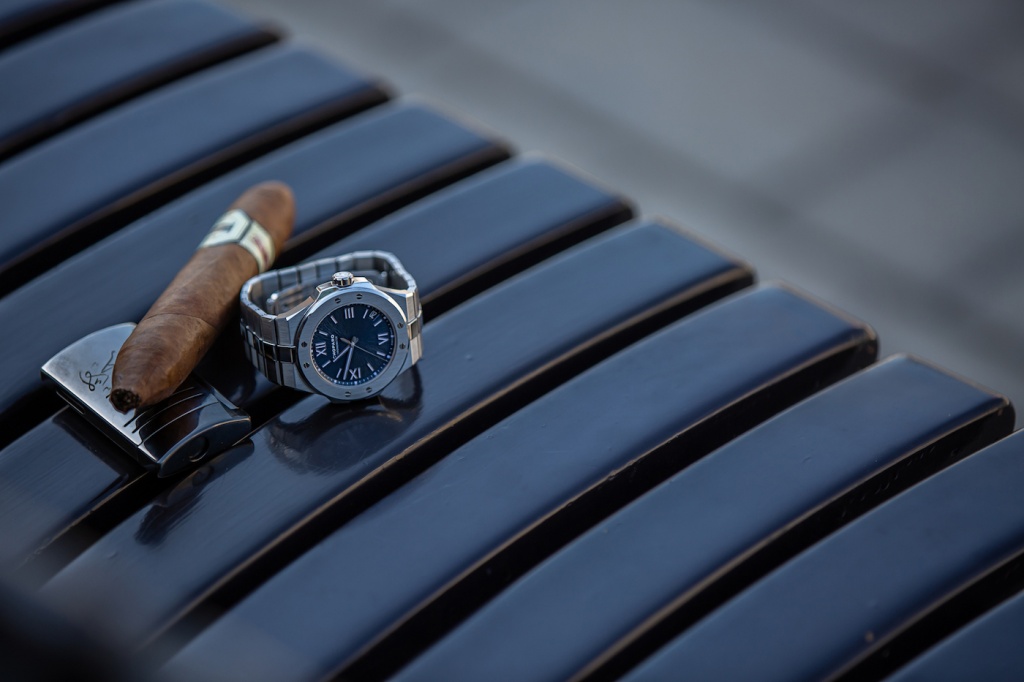 The first striking look  in the watch is the textured dial evoking the eagle’s iris crafted meticulously from the sand burst grey or blue dials. The finishing on the dial is a pure representation of the Iris which keeps you captivated starring at it details all round.The dial colour directly refers to the shades of Alpine ranges: Aletsch Blue for the bluish shimmer of the largest glacier in the Swiss Alps; Bernina Grey for the rock of the mountain chain bearing this name

For me, this was the first striking element of the watch that ticked one of the main important checkboxes I have for any watch I purchase. There has to be this element of attraction to the watch while looking at it; and this one has it! 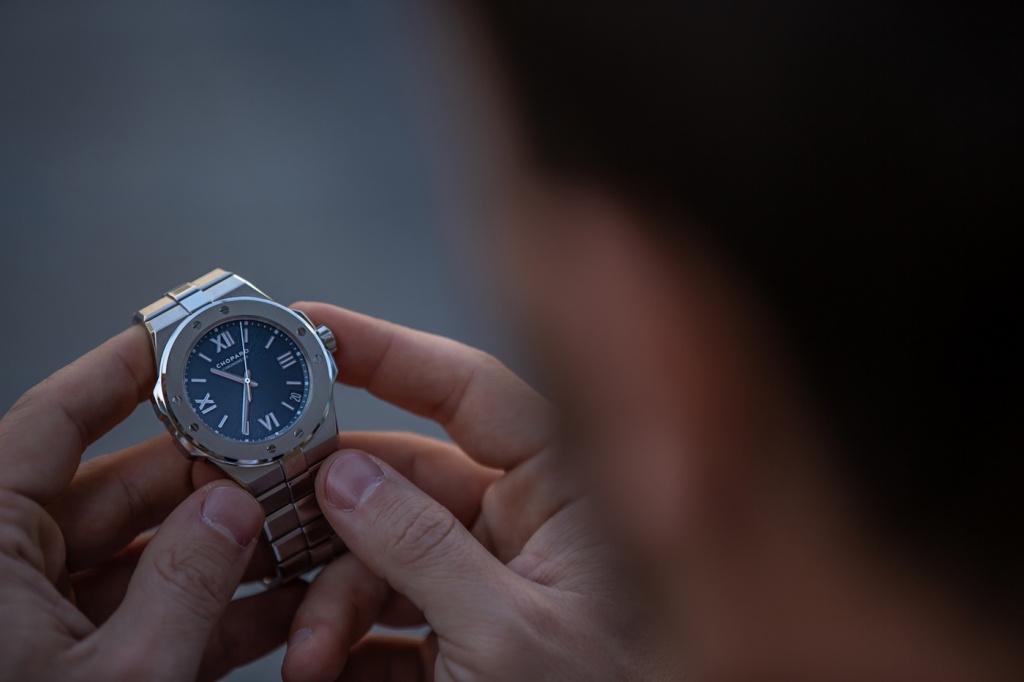 Looking at the hands, they are inspired by the raptor’s feathers;. The hours and minutes hands, like the hour-markers, are coated with Super-LumiNova® Grade X1 to enhance nocturnal legibility. Like the snow, torrents and rock of the Alps that inspired Karl-Friedrich Scheufele and change their appearance according to the light conditions, Alpine Eagle constantly alternates between polished and matt finishes. 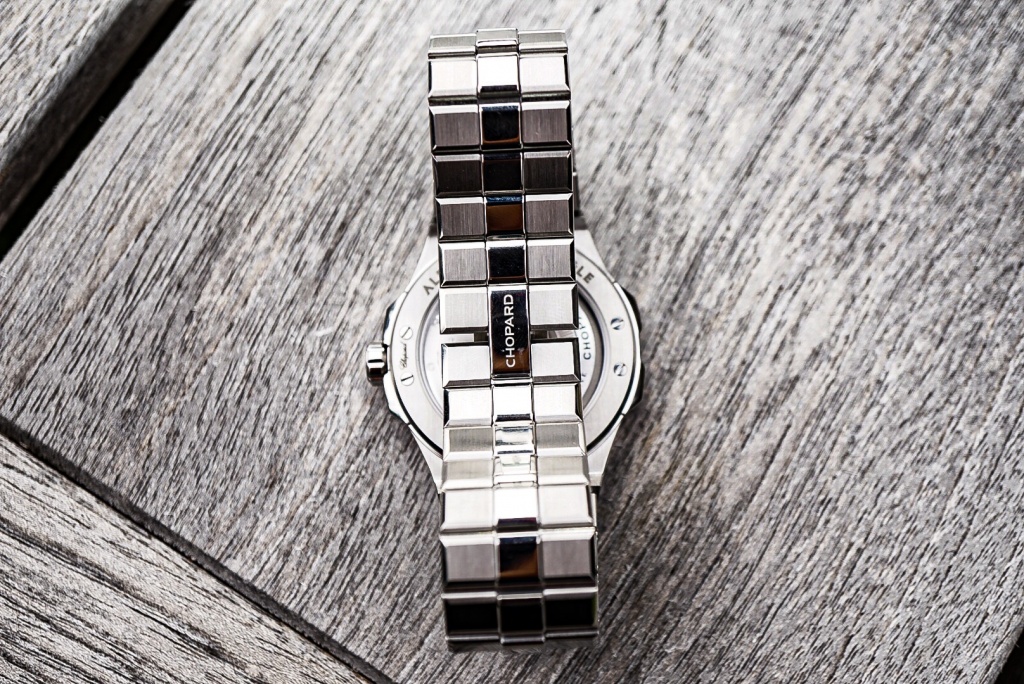 The gently tapered Alpine Eagle bracelet comprises a single ingot-shaped link, topped by a raised central cap. The case is distinguished by a protrusion protecting the crown engraved with a compass rose, an instrument that has helped adventurers find their way since ancient times. Today, it becomes the emblem of contemporary eagles capable of choosing the right direction in the pursuit of their destiny. 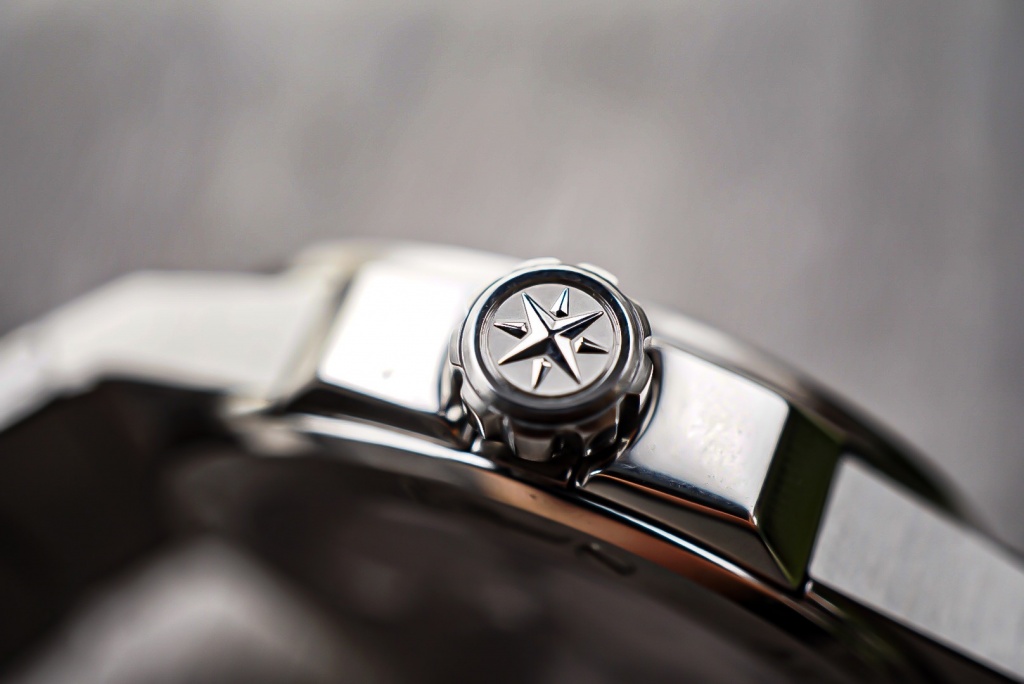 Lucent Steel A223: an Alchemist’s quest

To bring the Alpine Eagle purpose to life, Chopard has created a new material that is as rich, precious and complex as gold, transforming the dream of Renaissance alchemists into glowing reality. Lucent Steel A223 is a steel resulting from a re-smelting process featuring three unique characteristics.

Thanks to its anti-allergenic composition, Lucent Steel A223 has properties comparable to surgical steel, making it highly dermo-compatible. In addition, this alloy with its 223 Vickers’ strength is 50% more resistant to abrasion than conventional steels and has a unique hardness. Finally, with its superior homogeneous crystal structure, its purity enables it to reflect light in a unique way. Like diamond, whose brilliance depends on the lowest degree of impurities, this innovative steel has far less impurities than conventional steel, guaranteeing it brilliance and brightness comparable to that of gold.

True to Karl-Friedrich Scheufele’s deep commitment to fine watchmaking, the two movements with automatic winding embedded in the heart of Alpine Eagle watches have been developed in Chopard’s watchmaking workshops and chronometer-certified by the Swiss Official Chronometer Control – a rare event for watches in this category. 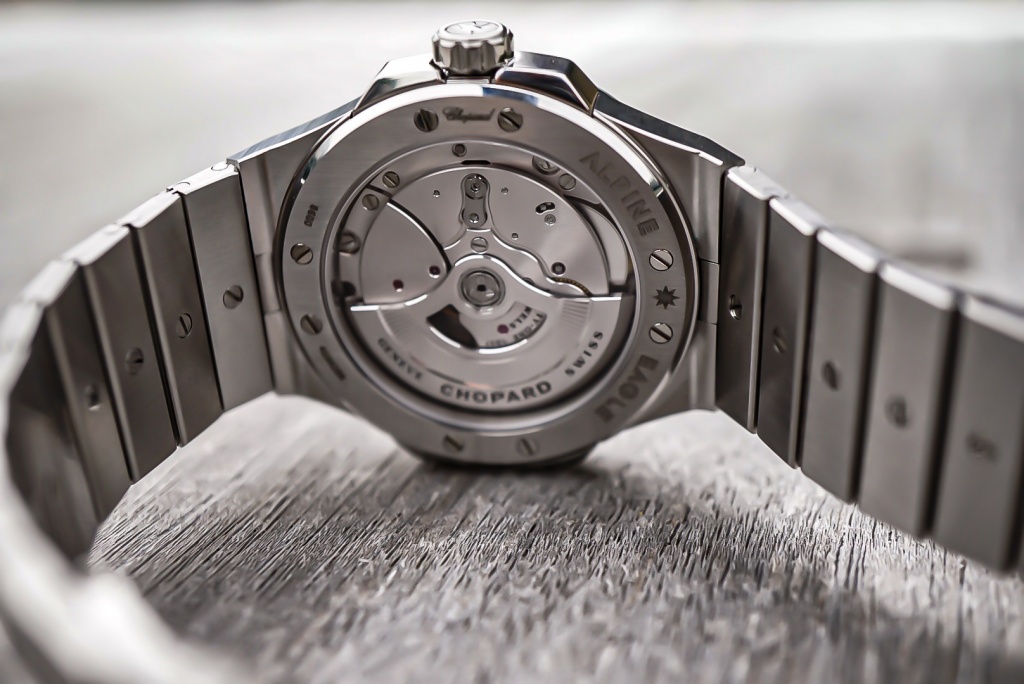 Chopard has produced and assembled all Alpine Eagle components in-house, from all the components of its movements to the making of its case and bracelet, whether in steel and/or gold.

I have been wearing the watch on my wrist for over 3 weeks now and one of the main important elements that got me attached to the watch is the comfort of the bracelet on the wrist. The links fall well on the wrist and the finishing mix between matt and polished links reflect the light so well that it keeps it shining at all time.

I decided to opt for the grey dial as I found it more subtle than blue, less available around wrists and discreet which I believe how this watch should be worn. It is a sporty chic statement that says a lot about the wearer.

Strap:   Ingot shaped links made of Lucent Steel A223 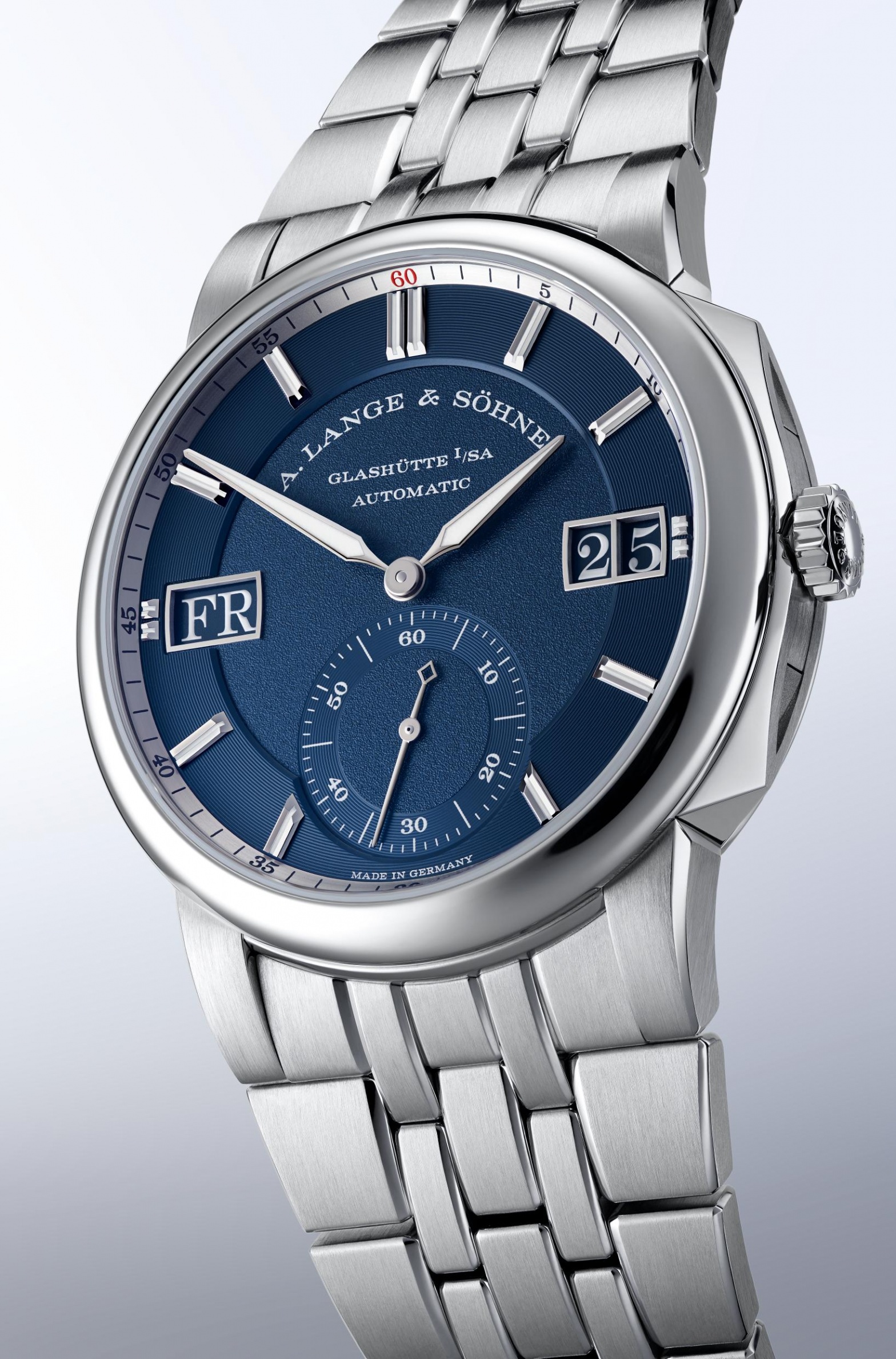 On October 24th at 4pm exactly, Lange & Soehne introduced The ODYSSEUS - It lays the foundation for a further watch ... 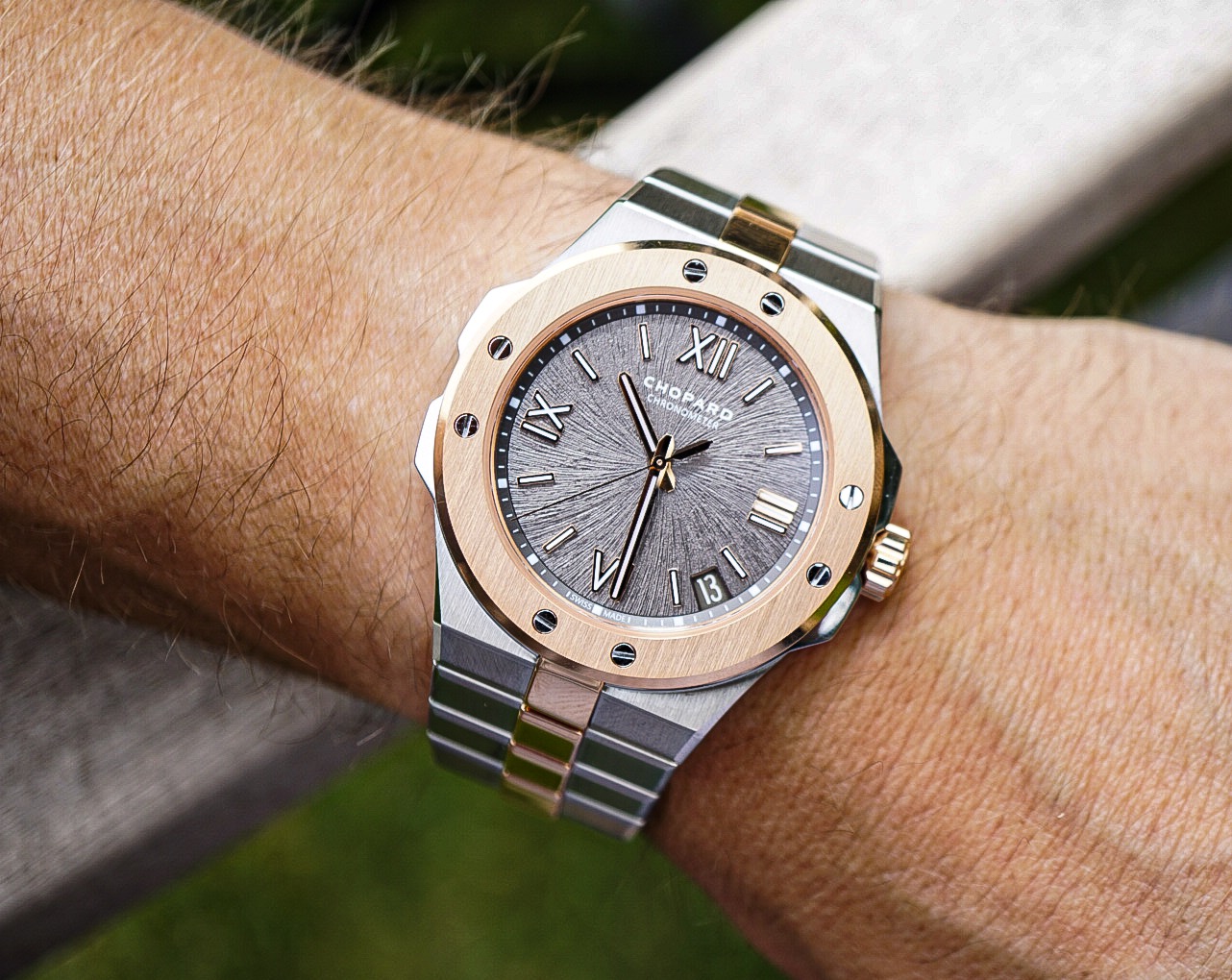 The Alpine Eagle has landed...

The new Alpine Eagle sports chic timepiece collection is a state-of-the-art reinterpretation of the St. Moritz, the firs...

Exclusive review of the FB1 Night Star made for OnlyWatch - Piece Unique... 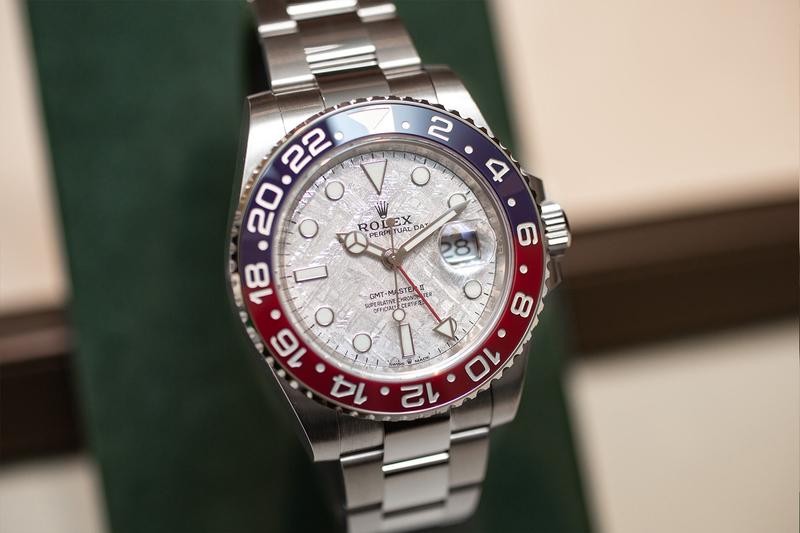 After a month since BaselWorld has ended we have got the juice for you from the best we have seen this year and the most... 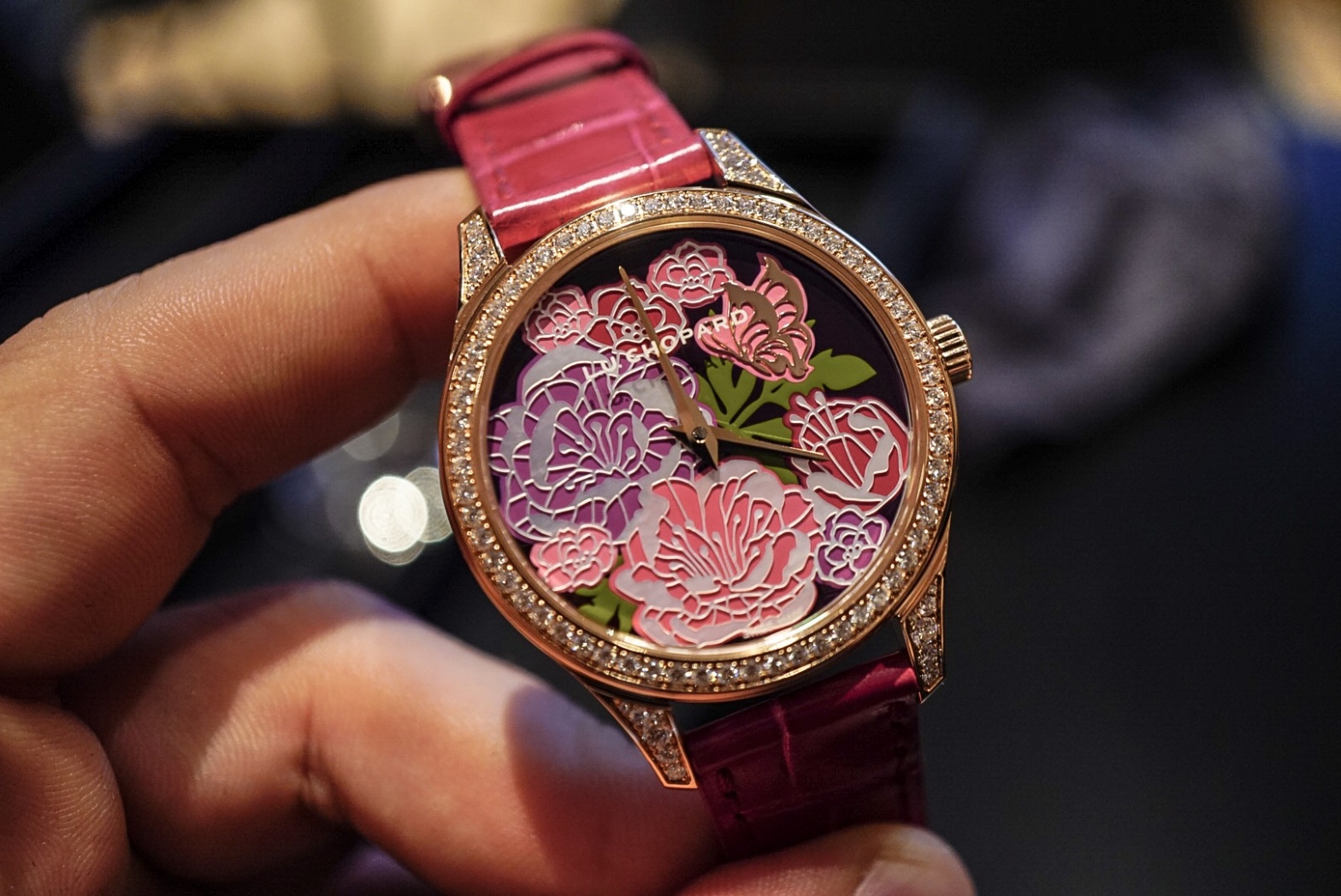 Chopard reveling some very creative collaborations with Saville Row for this Baselworld 2019 and introducing a beautiful... 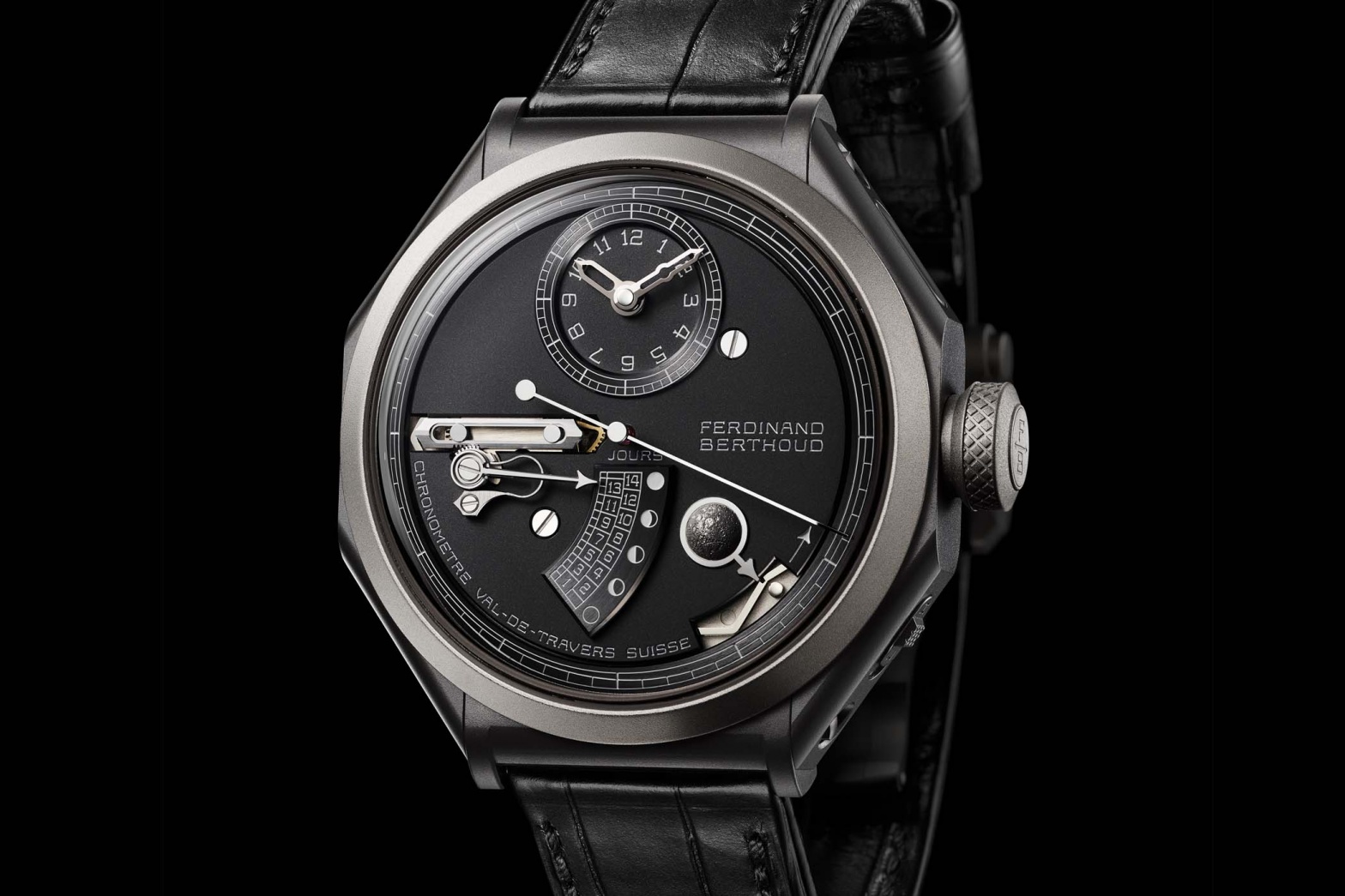 Today we speak with the team at Ferdinand Berthoud about their latest creation for BaselWorld- the totally new innovativ... 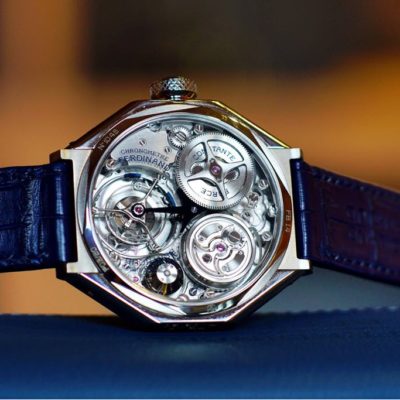 Today we had the great pleasure of visiting the manufacture of Ferdinand Berthoud in Fleurier with the AWC team. http... 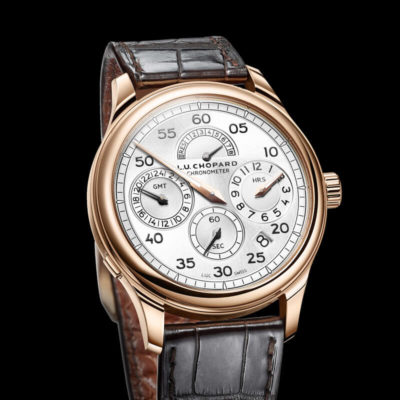 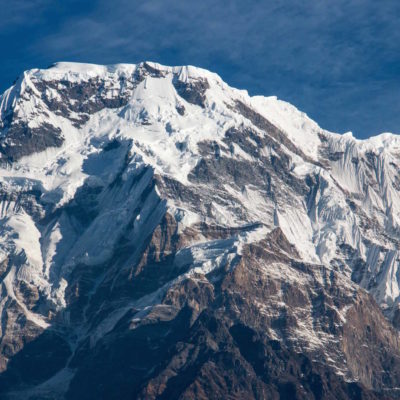