THE THINNEST MECHANICAL WATCH ON THE MARKET YOU CAN OWN NOW

Piaget stole the show at the 2018 Salon International de la Haute Horlogerie with the unveiling of the remarkable Altiplano Ultimate Concept – the thinnest mechanical watch in the world.

Measuring a gossamer 2mm, the Altiplano Ultimate Concept served as a stage for numerous Piaget innovations, including a case that formed part of the movement, a unique, integrated winding crown, an ultra-thin crystal and, more importantly, new constructions for the barrel and energy regulation.

Thanks to this evolution, the power reserve of the Altiplano Ultimate Concept extended to more than 40 hours, a benchmark in the canon of ultra-thin watches…

But what people wanted to know was whether or not such a complex and technically advanced watch could ever be produced commercially and, if so, would it be a practical proposition for daily use?

In 2020, Piaget is proud to announce that the answers to those two questions are ‘yes’ and ‘yes’ – because the Altiplano Ultimate Concept is no longer just an ambitious experiment in pushing the boundaries of horological micro-engineering, but a fully developed, tried and tested watch that is now available for watch lovers and collectors to buy, own and use.

From Drawing Board to Your Wrist

The team worked solely on the prototype for four years – during which time many of the established codes of watch making were re-invented – and spent a further two years perfecting the design and engineering in order to bring the watch to your wrist.

To reach the goal of creating a watch just 2mm thick – a remarkable feat which established a new world record – the team had to abandon conventional thinking.

Bear in mind, this watch is only as thick as a 1 Euro coin, thinner than most after dinner mints and the same height as just two credit cards stacked together !

Classical design dictates a standard four-layers construction: bezel and crystal; dial, hands and movement encapsulated in a case and case back.

With such specific engineering, the traditional movement mainplate disappeared, the case back being used both as part of the case and the movement mainplate, directly carved from one single block of gold. In 2018, Piaget pushed the concept even further by launching the Altiplano Ultimate Automatic which, at just 4.3mm thick, became the world’s thinnest gold watch.

With the Altiplano Ultimate Concept, the only option was to go one step further. Piaget embarked on a journey of unprecedented miniaturisation that resulted in the filing of no fewer than five patents, the process beginning with the creation of a case for the watch into which the movement baseplate is directly machined. 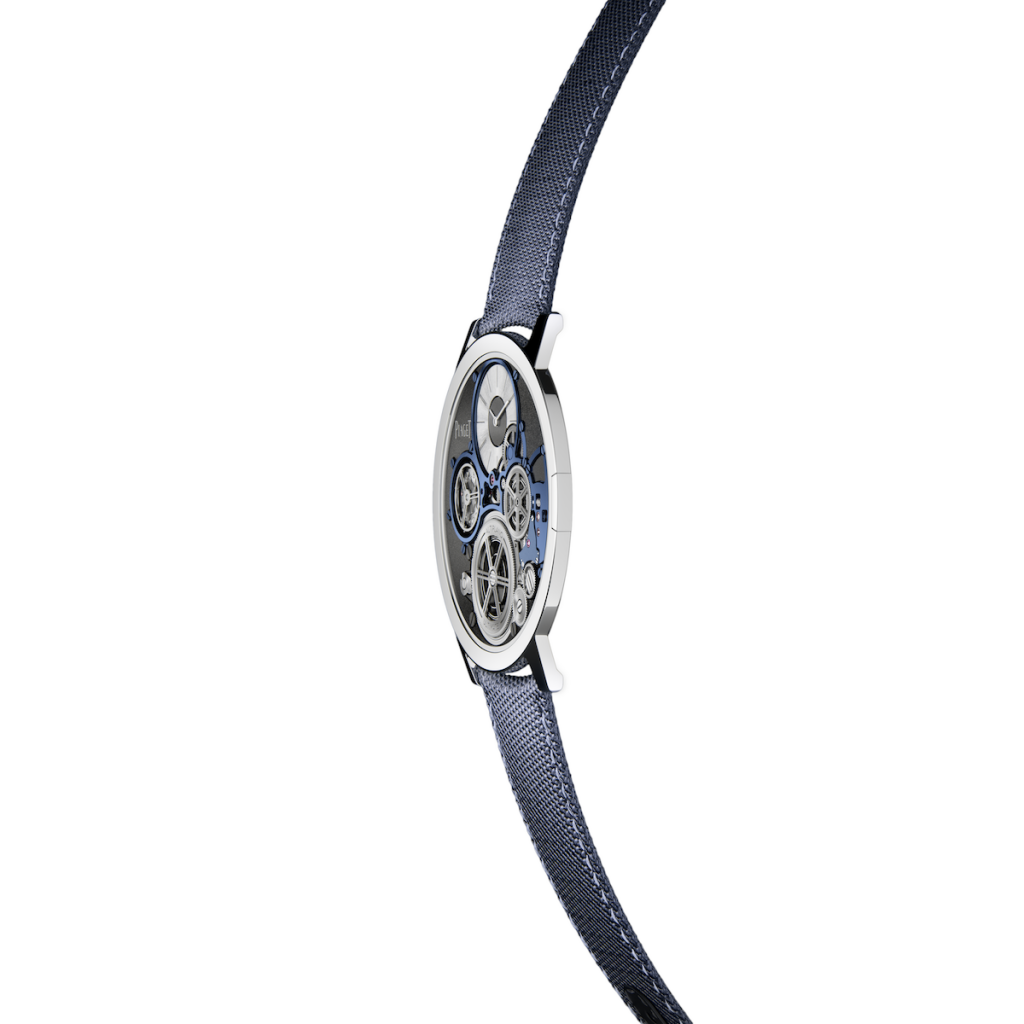 Too thin to use gold, the Altiplano Ultimate Concept case had to be made from a new, cobalt- based alloy that is highly resistant, 2.3 times stronger than gold and, therefore, much more difficult to machine.

Other parts were entirely re-engineered and re-sized, with wheels, for example, being reduced from a conventional 0.20mm thick to 0.12mm and the sapphire crystal, normally 1mm thick in a standard watch, being pared-down by 80 per cent to a scarcely believable 0.2mm.

The mainspring barrel (the source of power that drives the mechanism) is also of an entirely new design that has no cover or drum but is mounted on a single, ceramic ball-bearing within the frame of the watch and enables the fully-wound movement to run for up to 40 hours.

The crown, meanwhile, has been re-invented to take the form of a flat, telescopic system (with its own, specially-designed winding tool) that fits flush with the case band and in which the conventional sliding pinion clutch and crown wheel are substituted for a single, ‘infinite screw’.

Such a construction offers the great advantage of perfectly protecting the crown, and therefore the movement, from unwanted shock.

The dial’s off-centre position, meanwhile, meant that a conventional, straight winding stem could not be used – a problem Piaget solved by creating a patented ‘staggered’ stem.
In order for the system to function perfectly, the conventional hour hand is replaced with a revolving indicator disc while the minute hand works in the usual way.

So incredibly thin is the Altiplano Ultimate Concept that a mere 0.12 mm of cobalt separates the movement from the wearer’s skin – close your eyes, and you will struggle to believe you are actually wearing it.

The degree of thinness of this watch also means that even the method of indicating the time had to be re-thought. Instead of having a dial and two hands placed on top of a bridge, the Altiplano Ultimate Concept features a dial that lies beneath it, thus providing protection from any contact with the strong but wafer-thin crystal should it be momentarily deformed in an impact. This innovative technical feature is a patent registered by Piaget in 2014 (for the launch of 900P caliber).

Indeed, the Altiplano Ultimate Concept belies its wafer-like appearance by probably being tough enough to withstand everything from the level of G-Force experienced in an aerobatic jet to the force of a meteorite crashing to Earth!

A Finish Without Compromise

Although the Altiplano Ultimate Concept measures a mere 2mm thick, it contains a remarkable 167 individual parts, many of which have had to be produced to microscopically small dimensions in order for the goal of ultimate thinness to be met.

Nevertheless, Piaget’s strict parameters of accuracy, reliability and robustness all had to be upheld, as did the Maison’s reputation for producing exquisitely hand-decorated movements.

Clearly, the minuscule size of many components presented a challenge in this area – not least since the slightest error of judgement could result in the inadvertent destruction of a vital part.

But Piaget’s artisans rose to the challenge, embellishing the movement with sunburst and satin-brushed finishes, chamfered and polished bridges and enhancing the appearance of the combined case/baseplate with a sophisticated PVD treatment.

And, in order that the quest for slimness and practicality should be maintained throughout the watch, a special alligator skin strap and a blue baltimor technical textile strap were developed. They are all ultra-thin, featuring a velvet calfskin lining and an ultra-strong Kevlar – secured, of course, by an ultra-thin cobalt pin buckle.

Bespoke finishes and unique features are often considered key to luxury, a fact that Piaget recognised more than 50 years ago when it introduced its innovative ‘Style Selector’ at its New York boutique in order to offer customers the opportunity to choose the shape of their watch case, the type of dial and bracelet and the extent of the gem setting.

The idea proved so popular that it was rolled-out to Piaget stores around the world – and it has been revived today by making the Altiplano Ultimate Concept extensively customisable to the requirements of individual owners.

As a result, buyers may specify the colour of the bridge and dial, the finish of the hands and the main plate and select straps that match or contrast – a range of options that will allow the Altiplano Ultimate Concept to be created in more than 10,000 permutations, thus ensuring that few will be alike and most will be truly unique.

The Piaget Altiplano Ultimate Concept will, of course, be a rare watch in any event – but, with so many different combinations of colours and finishes available, there is little to no chance of a meeting anyone else wearing an identical example!

Piaget – the King of Ultra-thin

The aesthetic appeal of slim and elegant wrist watches has recently been re-discovered and more makers are returning them to their catalogues – but Piaget has consistently majored in the ultra-thin theme since the creation of the hand-wound Calibre 9P in 1957.

With a history dating back to its founding as a movement manufacturer in 1874, Piaget boasts almost unrivalled experience in creating and developing high-end mechanisms and has made ‘Altiplano’ a name that is all but a byword for the ultimate in thin watches.

When launched, the Calibre 9P’s thickness of 2mm (now matched by that of the complete Altiplano Ultimate Concept timepiece) made it one of the world’s thinnest mechanical movements of the era.

Since then, however, Piaget has established a string of records in the field, ranging from the 2.3mm Calibre 12P of 1960 (then the world’s thinnest, self-winding movement) to the creation of further record-breaking skeleton, diamond-set skeleton, date, automatic, manual-winding and manual winding chronograph watches, as well as – in 2017 – the Calibre 670P utra-thin flying tourbillon.

The Altiplano Ultimate Concept therefore continues the Maison’s great tradition – and will undoubtedly cause watch lovers to ask: “What can they possibly do next?”

Which is, of course, a question for the future… 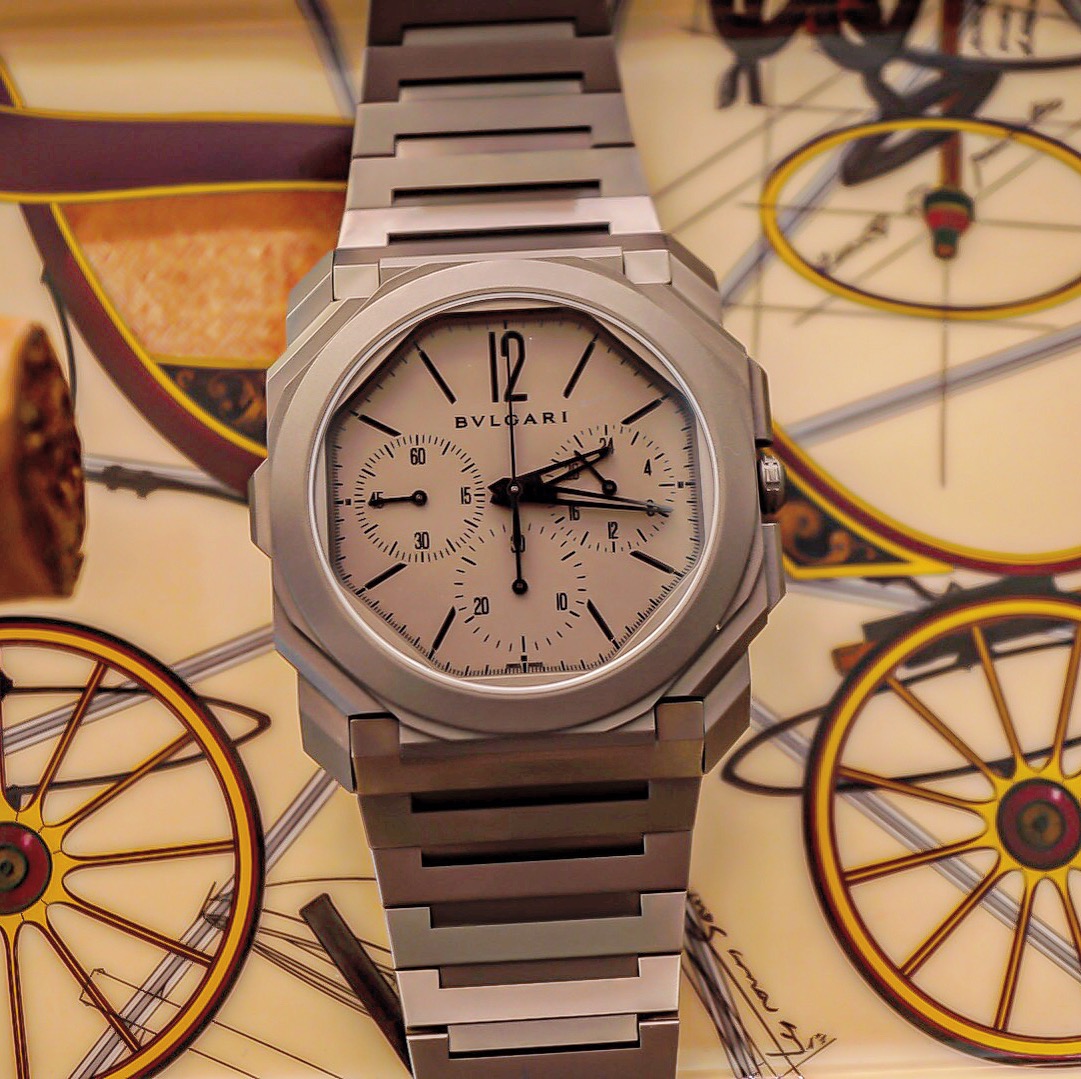 Reviewing the new world breaking record slimmest chronograph in the world by Bulgari...